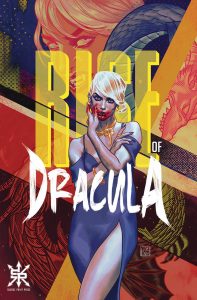 Power hates a vacuum, a void in control. It’s an analogical turn of phrase that can occur when someone in a high place of power has lost control, and no one is in line to replace them. The literal snake with its head cut off, or in other words, chaos.

That is the world Rich Davis drops his readers into with the second chapter of his Dracula Saga, Rise of Dracula. A world ravaged by social and political chaos, on the verge of damnation or salvation, and very much a tragic mirror of our own times. Davis takes the skeletal structure of the story he started back in Cult of Dracula and grows the muscles onto it to bear the load of the opus he is building.

While the plot can’t help but hit the same pitfalls many second instalments in a trilogy do, Davis understands the speed at which the story must move. The effective pacing allows the writer to craft a compelling sequel that continues his world of Dracula.

The first chapter dealt with the horrors at the Ordo Dracul cult compound and how the words of one can sway the minds of the few. Rise jumps forward in time, with the cult expanding into a much more terrifying organisation. The once small thought-crazed cult has reshaped itself into a large, strong political party under the finger of the new Dracula, Mina Murry. Within the opening pages of Rise, a political coup is wrapping up. Mina, the reigning “Dracula” with her vampiric cabinet, has taken over D.C. and most of the eastern seaboard. One can only imagine the world is her next step.

Little is hinted at how the United States got to where an openly Vampiric political party could ascend to such power so quickly. Things have gotten so bad that humans are actively selecting to leave their homes for free-range farms to be pets and breeders for their new vampire overlords, if only to be taken care of. It’s a sad, shocking, and understandable choice. In a real world where actual people need to choose between paying rent or buying food, one can grasp and empathise with how this fictional world got this bad this quickly.

This chapter of the Dracula Saga compares more to a hellish political satire than the gothic gory Saturday morning cartoon that chapter one came off as. Davis has something to say and a wave of anger to get off his chest, and it seethes through in his dialogue. The opening lines speak towards the ability to spin a narrative to make the masses accept the message, any message, no matter how hard a pill to swallow. A detail aptly displayed by the now Minister of Ordo Dracul, Abe Van Helsing, as he chastises his underling for not reading their emails, “We are peacekeepers, not infiltrators. They’re riots, not protests. Please make sure everyone checks their emails for changes. Propaganda is a precise science.”

There is a clear and present shift in the tone and the manner of the story Rich Davis wants to tell. A point hammered home when Van Helsing during a re-education sequence, in which a pact of children learns about useful and non-useful people. The classroom erupts in answers from eager students, with the opening answer being “dum-dums” and the closing being “anti-vaxxers,” to which Van Helsing replies with a wink of his eye, “We’ve already covered dum-dums.” Rise of Dracula takes on a vibe akin to John Carpenter’s They Live, but this time told from the perspective of the disguised horror looking down on their docile cattle.

No matter how much blood, guts, and gore Davis and artist Puis Calzada throw at the readers, the through-line narrative for this story is one of love. Sisterly love to be exact. Whereas Cult of Dracula dealt with Mina finding her place in the world and her rightful title of Dracula. Rise of Dracula takes on the point of view and perspective of Lucy Westenra to tell itself.

Lucy, who served as more the wild card character in the previous series, jumps front and centre this time around. Going into her overall arc would be spoiler territory, but the weight of immortality is bearing down on her. Throughout the six-issue run of Rise, Lucy matures to become a reluctant leader, constantly questioning just how the Ordo Dracul functions. Less of the mindless flower child turned blood-drinking creature of the night she was. Lucy isn’t ashamed of being a vampire. She’s just no longer amused by it. What looked to be a story of a villain rising within Mina becomes more of a hero’s journey for Lucy as she must find a place for the living in a world that is dying.

With the majority of the supporting cast butchered by the end of the Cult of Dracula, Davis desperately needed new meat to throw in the preverbal grinder. While a few familiar faces from the last chapter appear again, it is only for the briefest of cameos. Jonathan Harker and Arthur Holmwood make fleeting appearances but disappear quickly as the plot begins to deal with more significant threats on the vampire side of things. Though taking a back seat in the narrative here, Davis lays some interesting groundwork for how these longstanding characters will enter the final act of the trilogy. By the end, readers are shown a Jonathon Harker at his most heroic, ready to step up, and Kurt Russell the f**k out of this situation.

The title really shines with the growing cast of characters Davis has concocted. From traitorous trustees to an entire paramilitary religious group with the sole mission to destroy Dracula in all her forms. New characters are plentiful and exciting.

The first aid to Mina, her VP if you will, is the cunning Carmilla, a human woman with her eyes on greater prizes. She’s sold out her own kind for a soft seat at the Dracula’s right side. Even though that is a mere stepping stone, flashes of Game of Thrones’ Cersei Lannister are strong within her characterisation.

Taking the fight back is the Last Sons of Solomon, a religious sect turned militaristic last stand between humanity and the Vampiric hordes. Familiar faces of the past series are peppered into the ranks of the brotherhood, and these Easter eggs are fun nuggets for fans of the title. Halfway through the series, a noted horror icon enters the scene as chief scientist for the group, Dr. Victor von Frankenstein! Ever the monster maker, Frankenstein is up to his old tricks, re-animating stitched-together corpses and trying to crack the code to an undead virus. The Order and the Doctor are great additions to the lore Davis is building.

The clear apple of Davis’s eye from the new additions are the Ruthven Sisters — Babs, Lara, and baby Ellie. These psycho sirens are living their best undead lives. While they don’t serve any present purpose to the overall narrative, they certainly break the tension that is sinking its teeth all around them. Whether rolling at raves or roasting in Hell, these ladies are dropping one-liners and pop culture references. They will easily be fan favourites. That said, the sisters help draw attention to one of the series’ weaker aspects, as many elements are introduced in a short amount of time and space. 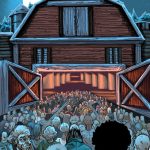 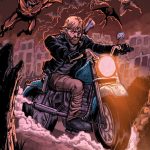 While the writer never exceeds his reach, Davis has started a lot of spinning plates within just six issues. At times, climatic events can feel hastened, moving at the speed of the plot. Readers may find themselves looking back at a few panels to better understand where they and the characters are in the story.

Cult of Dracula underwent a few changes in the creative staff before completing its run. With Rise, the same team again joins Davis. Puis Calzada continues to serve stylishly sick illustrations and ink work in this part two. Davis loves to indulge in the use of splash and double-page spreads to highlight the carnage and debauchery. Calzada meets Davis’s imagination at each turn and makes the act of turning the page a nightmare itself. The partnership is reminiscent of Robert Kirkman and Charlie Adlard, the long-tenured team of The Walking Dead comic book series.

Alex Zief covers the glorious gore that Calzada creates with vivid colours. Dave Lentz again lends his lettering talents to the book, bringing in the awesome touch of each vampiric entity having its own voice pattern and colour. Though minor, these changes in font style for the vampires are a lovely cherry on top of the epic sundae. Each member’s energy plays off like a band discovering its sound for the first time. A clear simpatico partnership is shared among the creative duties of each department.

The chains are clearly off moving forward. Cult of Dracula was a wild departure from its novel source material but followed its blueprint. Now Davis reads like a writer with complete confidence in his story. This may be Stoker’s sandbox, but it’s Davis’s world. If you haven’t joined the cult yet, now is a perfect time. Sink your teeth into it before it sinks its teeth into you!

Text courtesy of Chase Harrison and used by permission of https://www.horrorgeeklife.com/