If you are a fan of Hellboy, BPRD, Sledgehammer 44 or really anything from the ever expanding Mike Mignola universe (charmingly known as Mignola-verse), then you have at least heard of the Black Flame. A mysterious, German speaking figure with a burned skull face and a surrounding black flame, he’s known for giving our monster heroes a serious run for their money. While many have worn the Black Flame cowl, it’s the original wearer, Raimund Diestel who was the centre of the 5-issue origin story simply titled Rise of the Black Flame released in the last quarter of 2016 and the subsequent graphic novel out this May. It’s a tale of mysterious cults and whispered secrets, where children disappear in the middle of the night, and one man who has long avoided his destiny, all co-written by Mignola himself. With its stand-alone story, it doesn’t demand too much understanding of the Hellboy universe to enjoy.

The story, like much of Hellboy mythos stories, takes place between the two world wars, in a place once owned by another country and swarming with explorers. In Rangoon, British Colonial Burma (now known as Myanmar), young girls are disappearing by the handfuls, plucked right off the streets in the broad daylight. Enter our heroes Sergeant Geoffrey McAllister and his partner A.N. Sandhu, who promise the grieving parents to get back their children. As they search for clues, they come across a pair of women who too are explorers and hint that there might be much darker forces at work than the men might realise and soon, all four team up to get to the bottom of the mystery. One of the women, one Sarah Jewell, mentions that she has the perfect guide to take them to the jungles where the girls were last seen, but is there appears to be more to their newest associate Raimund Diestel than meets the eye. But as the clues and the bodies point them to a powerful foe, Diestel becomes the least of their worries when they stumble into somewhere they are not welcome.

The over-all comic is a very approachable read and aside from Raimund Diestel and the Black Flame’s second hand Kamala, all the characters are wholly original to the story. If you haven’t picked up a Hellboy or BPRD comic before, you can still read it without getting lost. If you are a fan, there is plenty of Easter eggs to pick through. The story itself is exactly what you would expect from Mignola in terms of a comic. Very esoteric, lots of action, and a solid Weird Tales vibe that soaks through the whole work. Mignola also puts in a ton of details from the world of the mystic arts, most that are actual occult happenings and beliefs, which makes The Rise of the Black Flame much more grounded than works that create their own mythology. This is the kind of weird stuff that actually exists. It’s one of the few times when reading a rattling conversation in a comic is actually interesting. 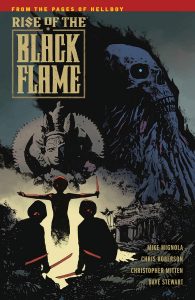 That being said, the drawback of the comic is how fast everything is revealed. They spend a good chunk building up a mystery and then simply stumble onto the right place at the right time and figured it out. It’s the classic Nancy Drew formula, just be right where you need to be and the answer will come to you. It’s less of a supernatural mystery and more of a supernatural thriller with some sweet fight scenes thrown in the mix. Speaking of fight scenes, the art by Christopher Mitten is on point. The lines work is clean and expressive and mimics closely to Mignola’s work while still maintaining its individuality. The colour palate is pretty subtle and works well with the moody work, helping to create a large world for the characters to play in.

Be sure to be at your local comic shop on May 31 for this one.