This week carried with it the sad news that recognisable character actor David Huddleston has passed away. He died on Tuesday of kidney and lung disease in Santa Fe, New Mexico. He was 85.

Born on September 17, 1930, in Vinton, Virginia, Huddleston is no doubt best remembered as ol’ Saint Nick in 1985’s Santa Claus, once an annual staple of the season to kids of a certain age (including this one). Another of his most memorable roles was playing the title character in the Coen Brothers’ 1998 classic The Big Lebowski.

A talented comedic performer, Huddleston was also no stranger to horror, having dabbled within the genre more than once. His first horror feature was 1974 exploitationer Nightmare Honeymoon, which featured on its poster one of the not-so-good riffs on The Last House on the Left’s classic gimmick, with the repeated phrase ‘Thank Heavens, it’s only a movie! Thank Heavens, it’s only a movie…’ 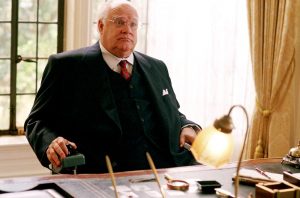 Further horror roles saw Huddleston starring in 1997’s The Man Next Door, and made-for-TV shark thriller Shark Kill (1976). Other roles sitting not far from the genre include those in Roman Polanski’s Frantic, Uwe Boll’s Postal and 2014 anthology Locker 13, his final film role. He also appeared in mystery TV series’ Tales of the Unexpected and The Sixth Sense.

Rest in peace, big fella. Christmas will never be the same.