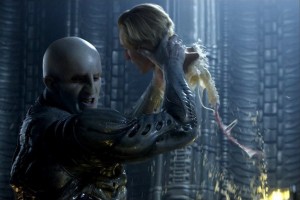 Ridley Scott’s Alien prequel Alien: Covenant is one of the most hotly anticipated films since, well, Prometheus, which it also acts as a sequel to. Scott fuelled the fires of excitement last year, announcing that in the newest chapter, “We’ll have them all: egg, face-hugger, chest-burster, then the big boy.” It is thought that by “big boy”, Scott is referring to the classic Xenomorph. The four-time Oscar nominated director also revealed that the film will feature a destroyed Engineer planet, and that an expanded universe is planned, eventually catching up with the events of his original 1979 classic, Alien.

With both Michael Fassbender and Noomi Rapace confirmed to reprise their Prometheus roles, and the former’s Steve Jobs co-star Katherine Waterston having bagged the lead role, casting now turns to the aliens themselves. Management group MCTV are currently seeking performers aged from 8 – 40, who are “skinny and very tall or skinny and very short but strong and very physically agile.” Damn, thought I was perfect until that last part. Ah, well.

It’s hard not to think that with such characteristics specified, Scott is looking for actors to portray Xenomorphs (played in Alien by 6ft 10in Nigerian Bolaji Badejo), also requesting that applicants be “Fast in Movement. Acrobats, Dancers, Gymnasts, Contortionists, Cirque du Soleil type performers.”

Alien: Covenant begins shooting in Australia in April, with plot details understandably shrouded in secrecy. Whilst we know a destroyed Engineer planet will feature, it is unknown whether the towering Engineers of Prometheus will appear again.

No doubt numerous whispers, rumours and lies will surface between now and the recently-set release date of October 6th, 2017.