Due to start filming soon is the Kickstarter-funded slasher Bridal Fever. Directed as it is by noted makeup effects artist Hayley Tinline, it would not be unreasonable to expect a bevy of gory practical effects.

Tinline, who has provided effects for The Unkindness of Ravens and Lord of Tears, makes her directorial debut with the film, which will be shot on location in Scotland. It was pitched as a “slasher with a gritty and grindhouse edge, influenced by 70’s films such as Black Christmas and Alice Sweet Alice”. 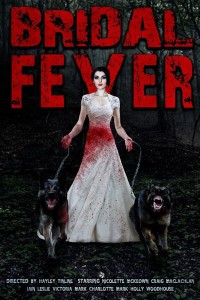 Bridal Fever stars alternative model and actress Nicolette McKeown as a bloodthirsty bride who exacts a terrible revenge upon her husband (played by Craig MacLachlan) after he cheats on her.

Bridal Fever tells the story of Lisa, a troubled young woman plagued by cruel memories of a monstrous childhood. Now married, Lisa thinks that she’s finally escaped the seething rage trapped within her…until the moment she witnesses the love of her life cheating with a naive teenage girl. This is a mistake that husband Stuart may quite literally pay for with his life.

The film follows Stuart, his lover and their friends as they explore the ruins of an old children’s hospital. They are not alone, however, and soon find themselves fleeing for their lives in a night of unparalleled violence and mayhem. One by one, the friends are pursued and subjected to an array of unspeakable horrors dished out by our bloodthirsty bride.