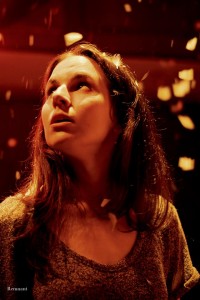 Synopsis:
Claire Miller is afraid to fall asleep. Plagued by nightmares, she finds herself waking in strange places with no recollection of how she got there. As her mental state gradually deteriorates, Claire will soon find out that the reasons for her problems have been with her for a very long time.

Once described as a Glaswegian David Cronenberg, award-winning filmmaker Andy Stewart is famous for his stomach churning shorts. His previous efforts, Dysmorphia, Split and Ink, have all done the rounds on the festival circuit and have gained him a reputation for making his audiences feel faint. Interestingly enough Stewart’s latest offering, Remnant, marks a slight change in style. Shifting focus away from shockingly realistic practical effects to the more dramatic elements of his story, he has hand delivered a short that is every bit intriguing as it is tense. Stewart once again proves that he is a master storyteller giving audiences plenty to chew on and this time, plenty to think about.

The film might star Hellraiser’s Nicholas Vince but the true star of the piece is Lucy Goldie. Stepping up to play the leading role of Claire, Goldie does so with such emotional intensity that it becomes immediately endearing to watch. Through her performance Goldie harnesses just enough power to keep the audience on edge and keep the film’s sense of mystery alive until the final frame. Speaking of which, Stewart’s latest tale is a visually striking experience. With conflicting hazy dream sequences against the sharp coldness of consciousness, Remnant becomes a different kind of monster to Stewart’s previous body horror trilogy.

As a whole I was impressed with what Remnant has to offer audiences. Although it doesn’t possess the same impact as his previous efforts, Remnant is supported by solid performances and framed by some stunning cinematography from Alan C. McLaughlin. This is not to say that Stewart’s latest offering is not as good as his previous shorts. If anything, it stands on its own merits. After all, it is a well paced thriller that knows how to keep its audience engaged and for that reason Remnant gets me excited for what I hope will lead to Stewart’s inevitable turn to feature filmmaking.