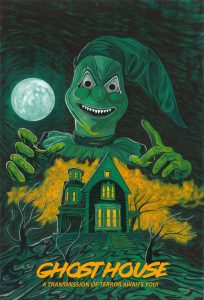 One of the giants of Italian exploitation, the late, great Umberto Lenzi directed some pretty nutty flicks during his long career. After igniting the country’s cannibal subgenre with 1972’s Man from Deep River (aka Deep River Savages), he went on to match Cannibal Holocaust’s nastiness with his later Cannibal Ferox. His height of batshit craziness though, arguably came with 1980’s zombie gore gem Nightmare City, but nipping at its heels surely, is 1988’s haunted house splatter flick Ghosthouse. And, while not Lenzi’s most celebrated film, the latter is now set for a crowdfunded remake.

Low budget horror filmmaker Dustin Ferguson is the director behind the project, which is, as per the Indiegogo page, “…moving forward this August despite what is raised here,” due to existing investment. “However,” Ferguson continues, “anything we can gather from fans and supporters will allow for bigger horror genre actors and more spectacular special F/X.”

The page describes the film as follows:
“Based on the 1988 cult-classic by Director Umberto Lenzi (Cannibal Ferox, Spasmo), this 2018 remake follows a group of college kids who trace the origins of a mysterious television broadcast to a secluded old house in the woods. Ectoplasm pits, flying objects, ghostly apparitions and the Grim Reaper himself are just a few of the horrors that await them inside.”

Hellraiser: Judgement’s Paul T. Taylor has apparently already been cast as The Grim Reaper. You can support the film here.