Occupying the previously unexplored ground between Critters, Meet The Feebles and Mac and Me is S.T.A.R (Space Travelling Alien Reject), an upcoming comedy-sci-fi-action-horror from Adam R. Steigert, director of low-budget horror comedy A Grim Becoming. Get your first look at the extraterrestrial weirdo in this official trailer. 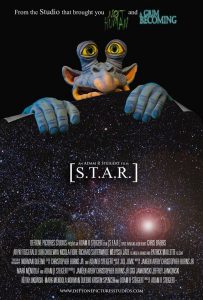 Produced by DefTone Pictures, S.T.A.R is currently in post-production, and was shot using 4K technology. The film follows alcoholic, washed-up writer Greg Vincent, who ventures into a small rural town in search of inspiration for what he hopes will be his comeback story. He badly needs a hit, as well as some cash to pay off a local crime lord. Hiding from the mob, Vincent meets STAR, a wise-cracking blue alien who is on the run from the murderous Meroarks on his home planet of Mars. Pursued by the mob and the vicious Martians, the unlikely duo seeks help from B-movie actor Alex Creed and B-movie obsessive Marissa, on a journey that could inspire the story to revitalise Vincent’s career.

The film looks like an enjoyably bloody take on the cheap E.T. wannabes of the ‘80s, with the title character a less family friendly cousin of ALF, or Mac, from the aforementioned big-budget 1988 flop.

Along with this trailer (below) come a few stills from the film (above), which will be playing a select few US cinemas in the coming months, ahead of a 2017 DVD/VOD release.