Hulu officially proved themselves purveyors of top-notched serialize horror content with the release of Castel Rock last month. The series produced by Master of Horror Stephen King and Bad Robot’s J.J. Abrams has been satisfying fans in droves. Pulling threads for many different King-penned tales, the series delivers original chills and genuine intrigue.

We’ll see if the trend continues when Light as a Feather hits the streaming giant on October 12th. As opposed to Castle Rock which airs a single episode a week, Hulu will release all 10 episodes of Feather at once, clearly catering to today’s binge-watchers who increasingly treat series like extended feature films. 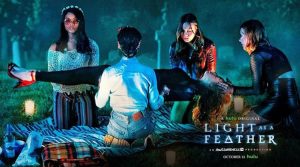 An innocent game of “Light as a Feather, Stiff as a Board” goes wrong when the five teen girls who played start dying off in the exact way that was predicted, forcing the survivors to figure out why they’re being targeted – and whether the evil force hunting them down is one of their own.

We don’t have a trailer yet, but if you’re not familiar with the game, you can learn the mechanics of Light as a Feather Stiff as a Board in the (hysterical) video below. Enjoy!

Synopsis:
You remember when you were in sixth grade and you went to a big sleepover at your neighborhood best friend’s house and a bunch of you recited a secret incantation that summoned the devil who, in His benevolence, gave you the temporary strength to lift your best friend off the floor using just your TWO FINGERS and you got really scared, like maybe it wasn’t a game after all and perhaps you really did summon the devil and you’ve never been the same person ever since?