Synopsis:
A family is tormented by a creepy stranger who arrives at their home on Christmas day. Dressed in a black cloak, the man announces terrifying home truths that could tear the family apart. 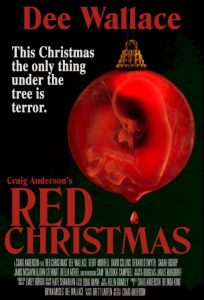 Red Christmas is a short and sweet slasher that injects life into the genre that so rarely impresses. Aside from a few scattered killer thrillers like Adam Wingard’s You’re Next and the post-modern comedy The Final Girls, it’s rare for a modern slasher to offer more than just a few easy thrills and to be remembered fondly long after the end credits . Red Christmas proves that 2016 can bring slasher thrills ramped up to breaking point. Packed to the brim with creative, grisly kills, tension and scares that lurk around every corner, Red Christmas is a total joy from beginning to end.

Red Christmas embraces a controversial premise for its slasher tale; the festive killer is motivated by his desire to find the mother who aborted him or, at least, thought she aborted him. Surprise! It’s a quite courageous concept to say the least. The film is driven by an unmissable religious theme, but despite its preoccupation with god, faith and everything in between, it never feels loyal to one side of the coin and manages to adopt a surprisingly neutral view on faith. Yes, there’s a priest (Peter – David Collins) and his wife (Suzy – Sarah Bishop) who aren’t painted in the most positive light – he’s portrayed as being a bit of a peeping Tom and she’s a stereotypically frosty character who refuses to let her hair down – but, the characters that aren’t of a religious standing are seen as equally as problematic, which prevents the film from being a devastating backhand to those that have religious beliefs. Perhaps we could have done without the harsh opening montage of brash opinions on abortion, but then again, Red Christmas is striving to be a bold vision, so why shouldn’t it begin as aggressively as it means to go along?

The entire family and flawed in very different ways, with the only truly innocent party probably being Jerry (Gerard Odwyer); Diane’s (Dee Wallace) son with Down’s syndrome, who only desires to do the right thing. For all their negative traits and decisions, however, we never feel as though the family deserve this hellish Christmas. This isn’t a slasher film that treats its characters like objects that are there to be mutilated; there is a clear intention to bring more to the story than a set of two-dimensional nobodies. At only 82 minutes long, we are only given a very brief introduction to the family before the carnage ensues, but it’s a spot-on insight in to their dynamic o and the quickly crafted air of negative energy that engulfs them. It is their inability to unite that leaves their metaphorical door open, allowing a very physical, violent energy to take advantage of their time of discord and that’s where the fun begins for the audience.

In terms of brutality, Red Christmas hits the nail on the head and brings a heap of well-timed, creative killing to the screen. We know that people are going to die in Red Christmas, but the execution of the kills is where this film exceeds expectations. There are stunning moments that hit you like a brick, shots that will leave you in awe of their terrifying beauty. It’s an unsettling feeling to enjoy the murder of these innocent people, but murder has never looked so beautiful. There is an effortless build-up of tension conjured as the cloaked killer makes his way around the house to the sinister sound of festive music which is anything but merry. Set against a backdrop of Christmas lights when the main electricity is cut-off, there are visual delights as well as gory thrills as every scene is lit-up in a colourful style of neon blues, reds and greens, which gives Red Christmas a lovely retro vibe. There is a drastic shift in Red Christmas’s shooting style when killing time arrives, with the realistic, natural framing of the scenes being abandoned for harsh, askew angles and dramatic close-ups. It makes for a thrilling experience that heightens the intensity of the family’s situation and emphasises the films desire to be both gruesome, but gorgeous and a throwback to classic slashers from yester-year. 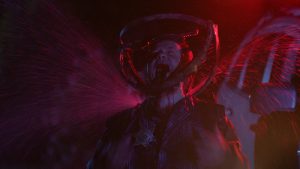 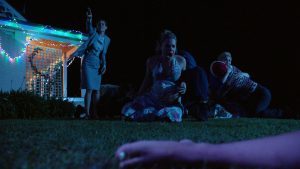 Red Christmas becomes a twisted version of the Frankenstein tale as this monster craves love and destruction in equal amounts. Both Frankenstein’s monster and this one that is intent on revenge are products of their unfortunate upbringings, thus deserve a certain amount of sympathy, but this Christmas killer leaves very little room for empathy when he knowingly torments those who don’t quite deserve it. It’s a complex base for a film that could easily become a mindless killing spree, but Red Christmas’ intentional thread of thoughtful poignancy ensures it is anything but a simple slasher.

Red Christmas is a refreshing festive horror that I will certainly be reaching for when December comes around. It has earned its place among the best and can sit comfortably on a shelf with Black Christmas, Gremlins, Die Hard – yes it’s a Christmas film! – and Silent Night, Deadly Night as great examples of alternative Christmas cheers. Red Christmas is striking, bold and brilliant; a sure-fire Christmas classic for horror lovers.