Now this is how you cut a trailer. While it may be overly keen to insist we expect something “fucked up” from the film, this new red band trailer for Don’t Breathe is a lesson in how clever edits and considered sound design can effectively convey a film’s feel and tone in under two minutes.

Three teens who get away with perfectly planned home robberies have set their sights on one last payout that will get them out of crime forever. Their target: a reclusive blind man with millions of dollars in hiding. But as soon as they break into his home, the tables are turned and they find themselves trapped and fighting for survival against a psychopath with secrets of his own. 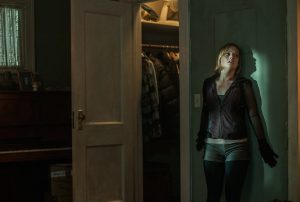 Don’t Breathe stars Evil Dead’s Jane Levy, who made her name in TV’s Suburgatory, as well as Dylan Minnette (Let Me In, Goosebumps), It Follows’ Daniel Zovatto and Stephen Lang (Avatar, TV’s Salem) as The Blind Man.

Don’t Breathe hits US and Canadian cinemas on August 26th. UK audiences will have to hold their breath a little longer, with the film reaching these shores on September 9th.