A sweary red band clip has been unleashed for Dan Bush’s (The Signal, The Reconstruction of William Zero) The Vault and it asks, “What the f*ck are you looking at?” It’s rather creepy, indeed. However, the response we’re given is far creepier and we are more than a little intrigued to see what supernatural business is lurking in a supposed bank vault. 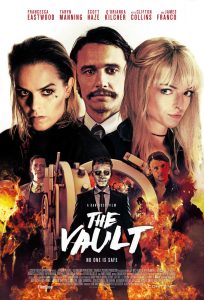 The film follows two sisters that are forced to rob a bank to save their brother, but what they’re greeted with is a bit more than they bargained for. Described as “The Town meets The Sixth Sense” we’re hoping for nun masks and the utterance of “I see dead people”.

The Vault has a great cast that includes James Franco, Taryn Manning, Francesca Eastwood and Scott Haze. You’ll be able to get your hands on The Vault when it is released in the USA on 1st September and the UK on the 8th September.