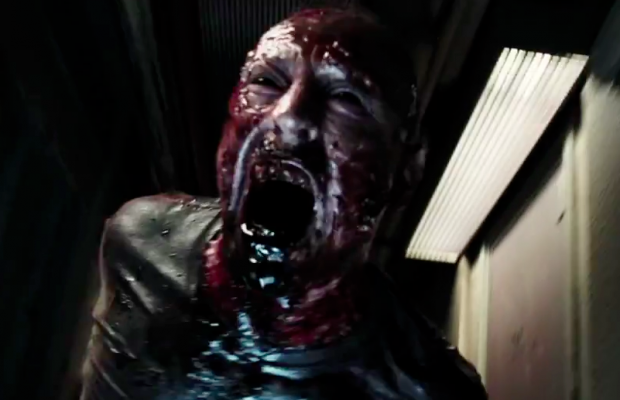 Synopsis:
Television reporter Ángela Vidal is rescued from a quarantined block of flats in Barcelona and taken to an oil tanker to be examined. However, it is unbeknown to the soldiers that she may be carrying the seed of the mysterious demonic virus.

It’s been just seven years since co-writers/co-directors Jaume Balagueró and Paco Plaza stunned us with their authentic minimalist spin on the zombie and found footage genres and here we are reviewing the fourth and final chapter. This saga sendoff provides a boat load of new concepts, ties in plot devices from all three predecessors and even manages to serve up an unapologetic ode to cult genre favourites. It’s that good.

First things first though! Many a fan of the saga condemned outing number three for daring to break the REC template. Diehard fans’ gripes were understandable but the comedy-centric approach was a no-brainer given the fact REC3 released in the thick of thriving zom coms such as Tommy Wirkola’s Dead Snow and Brett and Drew T. Pierce’s DeadHeads. In terms of humour, REC4 certainly has its fair share, particularly in the form of tech nerd, Nic (Ismael Fritschi), but it’s piddling in comparison to REC3 as Balagueró knuckles down to replicate the tension and fear he mustered up in 2007 and 2009. I’m hoping these serve as words of comfort for those with axes to grind after Plaza’s offering.

Balagueró often commented that he could never have made REC4 without everyone’s favourite reporter, Ángela Vidal (Manuela Velasco) but she is by no means the only point of reference to previous REC films. REC4 also brings the Medeira girl’s story back into the fold and actress, María Alfonsa Rosso is an excellent addition as a hung over elderly lady who is certain she must have got lost on her way home from a certain gate crashed wedding ceremony. Many will also be wondering if the found-footage technique reprises its role. This time it’s virtually non-existent with the exception of security cameras littered around the new setting but they are used sparingly at most and it works perfectly.

RECollections aside, Balagueró unabashedly plunders plot devices from quintessential classics ranging from Alien through to The Thing. Admirably, he plays his cards just right as every allusion used ramps the suspense to edge-of-your-seat levels and everything fits snugly into the REC story arc, never feeling forced or derivative. This is particularly true of the “no-one can be trusted” technique which fans of The Thing will be extremely familiar with.

That said, despite the fact the entire film takes place on a dimly lit ship, the feeling of claustrophobia and fear is apparent but it never really overwhelms as much as I felt it could have. This shortcoming is however more than made up for with copious amounts of raw, chaotic zombie face offs. Suffice it to say Balagueró could give Gareth Evans a run for his money were he to ever dabble in the action genre.

As is often the case when it comes to zombie invasion films, 99% of REC4’s supporting cast serve as cannon-fodder (primarily soldiers on security duty) to quash the zombies’ thirst for blood. That said, the film’s protagonists are everything but mere pawns on a floating bloodbath. Right about now is where I expected to find myself ranting and raving about Manuela Velasco running riot on the ship, sporting her John McClane grandad vest again. Don’t get me wrong, she summons up a perfect hardy version of the Angela we met way back when, now blending equal parts of Alien’s Ripley and Terminator 2’s Sarah Connor. Despite her faultless performance, Paco Manzanedo is the man of the hour. He plays Guzmán, a firebrand military medic who rescues Angela from the block of flats before they both awake to find themselves prisoners aboard the ship. Describing Manzanedo’s performance would spoil the whole plot so let’s just say he nails his role into the ground.

If you are planning on going into REC4 expecting a return to the first two films then think again. That as it may be, for those who lost faith in the REC saga when it came to number three, REC4 may just be the atonement you were hoping for. Whilst the final chapter doesn‘t quite recapture the fear the original film instilled in us all back in 2007, Balagueró has certainly achieved his prime intention, to send the REC saga off with an almighty, gruesome bang.