It’s been many years since a book has been released on the work of Stephen King that featured a compilation of essays and short pieces about the horror master’s work from scholars and his contemporaries alike. Works like FEAR ITSELF & KINGDOM OF FEAR were made popular in the late 1980’s and early 1990’s by the noted and much missed small press publisher Underwood-Miller.

Decades later, editor Brian James Freeman offers up his latest and much anticipated book, READING STEPHEN KING, which compiles essays by King fans, critics, and those who have worked with the author himself.

Author Stewart O’Nan opens with his piece, “Sometimes You Go Back” in which he explains the all knowing importance of revisiting classic King works again and again. Up next, publisher and writer Richard Chizmar recounts his love affair with King’s classic CHRISTINE which is followed by a highly entertaining piece by Director Frank Darabont celebrating the iconic artwork which graces the cover of King’s books.

Other notable contributions to the book include Bev Vincent’s biographical and thoroughly researched piece on the mysteries King has written, “Living in a Web of Mystery”, and director Mick Garris’ essay on his failed THE TALISMAN script which delves into the often overlooked process to screenwriting and adapting novels for the big screen. 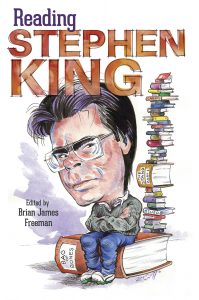 READING STEPHEN KING really has it all for the casual and the die-hard fans alike from essays by famed King scholars Tony Magistrale and Michael R. Collings, to writings on religion and King, the lost works of Stephen King, a look at being a foreign Stephen King fan, and reviews and pieces by King contemporaries and horror greats Clive Barker and Jack Ketchum.

The book is being produced as a beautiful limited edition hardcover by King specialty press Cemetery Dance Publications and while the cover price tag of $55 might not appeal to all fans, the words within which celebrate and embrace our love affair with Stephen King are worth every penny.