Whilst most notorious for his role as Leland Palmer in Twin Peaks, seasoned actor Ray Wise has amassed one almighty résumé in the horror industry. Having featured in such a wide spectrum of genre movies from Robocop, Big Ass Spider to Jeepers Creepers II and even having played the Devil himself in the sadly short-lived television series, Reaper, Wise has always enjoyed a thriving horror fan base.

Now, under the direction of Philip Adrian Booth, Wise’s latest venture, Dead Still – an unquestionable ode to Asian supernatural greats – finds him playing the macabre Victorian death portrait photographer, Wenton Davis. When his great grandson, a wedding photographer, inherits Wenton’s antique camera anyone he takes a picture of dies in the most gruesome and unexplainable circumstances.

To celebrate the release of the film this week, we caught up with Ray Wise as he takes us on a tour of the “negative” world and explains just what it was that attracted him to such a dark and devious role…

SCREAM: Ray, how did you become involved in Dead Still and what was it that convinced you to play a Victorian death portrait photographer?

RAY: I became involved with the Booth Brothers, Philip Adrian Booth, who wrote and directed the script, and his brother who was the production designer. They got in touch with my representation wanting me to play a role in their movie, Dead Still. I read the script, the deal was made, I found the film interesting and my character interesting. My character, Wenton Davis, was a photographer of the dead during the Victorian period. During that time there was a custom of taking the last photograph of your dead loved ones, dressing them up and sitting them on a chair and taking the last photograph. I did research on photographing the dead and I was excited about the project – I thought the subject was interesting. I knew that the Booth Brothers had a reputation for having very good production values and it was going to be shot in Louisiana, in an old civil war mansion, which provided the perfect setting for the film.

SCREAM: What was it like working with The Booth Brothers who also have a great deal of experience when it comes to horror? 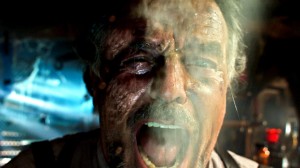 RAY: It was a great experience working with them. They know exactly what they want and they know how to communicate to the cast to let them know what they want to see. Once again, the production design was incredible, with old antiques from the Victorian era. In fact my camera was from the period and I had to learn how to use it and take pictures with it so they really set up the atmosphere for making it feel real to the actors. After putting on the costume, growing a little Van Dyke beard, moustache, and letting the hair grow long, looking at myself in the mirror and walking onto the set I actually felt as if I was in that world and I have a great imagination anyway so it was pretty easy to get into the character of Wenton Davis.

SCREAM: It says the film is based on factual events. As far as you are aware, how factual is it and did a death camera and/or your character, Wenton Davis exist?

RAY: In terms of photographing the dead, I think it was very factual. Again, it was the custom of the period, at least here in the United States, to photograph the dead. The horror aspects, of course, are made up from the imagination of the Booth Brothers. It was a lot of fun to play in a story like that and to be in that world.

SCREAM: Did you do much research into death photography for this project and was it a tough subject matter to delve into?

RAY: It was certainly foreign to me and I was not aware of that custom. I felt as though I had seen some photographs like this a long time ago but they had escaped my memory. Then, when I reacquainted myself with all the material in my research, I was amazed by the quality of the photographs and the extent to which they dressed up the dead and opened their eyes so that they looked alive and sat them up in their chair to take that final picture, and that final picture was so very important to the bereaved family. It was very strange to see that that was the custom. I guess death was very much more a part of the their life than it is today. Today we don’t feel too aware of death until someone very close to us dies, and then we feel totally aware of it, but we don’t deal with death in the same way that they did back then, so it was really enlightening to discover.

SCREAM: What was it like working with all these ingenious and gruesome contraptions to take the death portraits?

RAY: That was great fun! We shot in locations that were very spooky and appeared to be haunted themselves. This old mansion that we were in in Louisiana was just an amazing, amazing place and the photography lab that they set up for the photographer, the old alleys and streets full of old shops… they created the proper atmosphere for not only the film but for the actors to feel as if they were in that world and I certainly did. As I said, the horror aspects were purely from the imagination of the Booth Brothers. 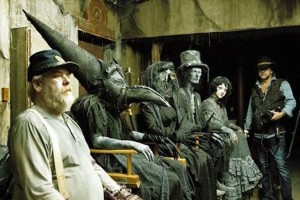 SCREAM: It must have been quite a unique experience sharing most screen time with people playing cadavers. Did not having to exchange dialogue with anyone with a speaking role until the final scenes pose a challenge?

RAY: We were capturing the way dialogue was used 150 years ago. I found that their use of language was much more poetic, much more so than today. They had a much larger vocabulary, and a way of using those words that were very beautiful to listen to.

SCREAM: It’s a particularly gruesome film in places with quite a few gnarly deaths. Did you expect the effects team to get so grisly when you signed on or did it take you by surprise?

RAY: Some of it came as a surprise, yes. I love to be surprised by all of those aspects as they happen when they shoot them. When reading the script I found it very inventive in the way the dramatic and horrific moments were placed. There’s a kind of formula for making a horror film, every 8 or 9 minutes putting in a little bit of horror, something to jolt the viewer, to keep them interested for the next 8 or 9 minutes. The Booth Brothers certainly know that formula and I think they were able to achieve this and more in Dead Still.

SCREAM: The film is reminiscent of Japanese horror greats like Ringu and Shutter. Are you a fan of all these great Asian supernatural tales?

RAY: Oh yes, I’ve been a fan of horror and supernatural tales my whole life. When I was 10 years old I was given a first edition copy of Bram Stoker’s Dracula and I read it several times and fell in love with that whole mythology. I’m half Romanian anyway so it was easy for me to put myself there in my imagination of Transylvania. I loved all of those old Hammer films with Peter Cushing and Christopher Lee, and I loved all of the monster movies of the ’50s so I am steeped in horror and supernatural and I have to say I like the old stuff; monsters created by special effects and great makeup men and not computer generated monsters. So yes, I love those tales and any time I can find a script that has these elements and an interesting character I can play, I go for it.

SCREAM: Surely you must have asked to take the film’s enormous evil portrait of you home to hang on your wall! What happened to that?

RAY: I don’t know! I love the portrait! I think that that’s my Picture of Dorian Gray. I didn’t see it until I actually saw it on the screen here and it’s a great portrait. I would love to know what happened to it and, in fact, thank you for reminding me.

SCREAM: In a couple of weeks, Digging Up the Marrow is also released. Adam Green said the film blurred reality with fiction and shooting it gave him nightmares. Did you suffer the same experience?

RAY: I love Digging Up The Marrow. I’m thrilled with that film also. It’s a story trying to prove that monsters are real. I can’t wait for everyone in the UK to see it. It’s a new model for a horror film. It’s a strange mix as it’s kind of a documentary but it’s not, and there are real people in it who play themselves, but there are fictional characters also. It’s a strange but wonderful mix and it’s really a great story. I couldn’t be more thrilled with Digging Up The Marrow. I also have another film coming out called Suburban Gothic which is a good old-fashioned ghost story. I am playing one of the lead characters in that also so keep your eye out for Dead Still, Suburban Gothic and Digging Up The Marrow, and everyone can tweet me @therealraywise if they wish….

SCREAM: Did you get to see the monster effects beforehand or are they all, or mostly, genuine frightened reactions?

RAY: Frighten the actors kind of thing, yes. Everything that happens actually happens in real time, as you see it. I think there are a few moments in Digging Up The Marrow that are jump out of your seat moments and you are not gonna believe it when you see it…

We’d like to thank Ray for taking time out to speak to us about Dead Still which is available digitally through Content Films now.

We’ll leave you to enjoy the trailer: 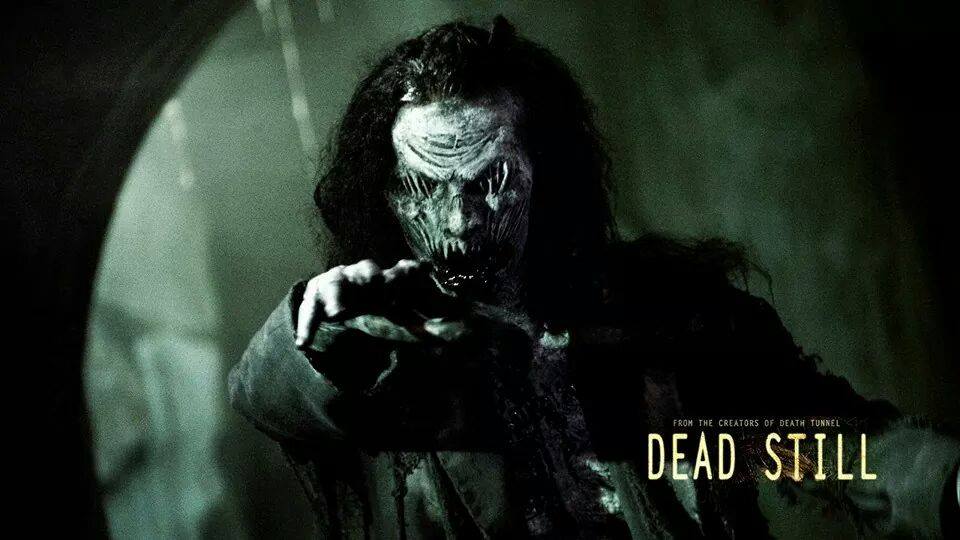