Writer/director Julia Ducournau’s award-winning debut Raw was one of the most talked about festival hits of last year, winning awards at Cannes (where it had its world premiere), Fantastic Fest, the Strasbourg European Fantastic Film Festival and the BFI London Film Festival among others. Ahead of its March release, a new Red Band trailer has been released to satisfy your carnivorous cravings, and it’ll make you squirm whether you’re a meat eater or not. 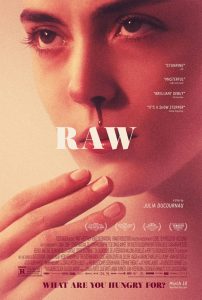 Marillier portrays the teenaged Justine, who commences her studies at veterinary school to follow in her family members’ footsteps. Raised as a vegetarian, Justine is pressured at school to try meat for the first time. Once she does, she plumbs both the depths of her own soul and tests the limits of her darkest cravings.

Released by Focus World, Raw will open in select US cities on March 10th, 2017, with a digital home release to follow in the summer. Its festival run is still not done however, with a screening scheduled for the Sundance festival on January 22nd.