There’s a whole lot of VHS-love going on right now. With feature-length documentaries such as Rewind This! and Adjust Your Tracking celebrating the format and several bespoke cult film distributors putting out limited edition VHS releases, not to mention the growing legion of tape collectors worldwide, those clunky black boxes certainly seem to be enjoying a resurgence of sorts.

Horror films are also showing their appreciation, with V/H/S having spawned two sequels, and Jackson Stewart’s Beyond the Gates currently in the midst of a strong festival run. One cannot fault the timing then, of the upcoming DVD release of Gautier Cazenave’s House of VHS. Ahead of the release, you can check out these awesome, VHS cover-inspired slices of promotional art. 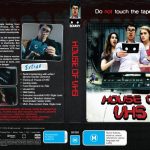 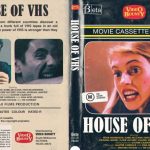 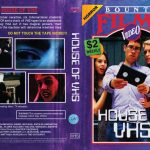 Synopsis:
A group of young people hailing from six different countries take off for a summer vacation in the French countryside. They force their way into an old abandoned house, and plan on spending a good time despite having no water or electricity. But one of them discovers a dusty trunk full of VHS tapes, with a mysterious VCR that seems able to work without electricity. After they start watching the bizarre movies recorded on the tapes, the students realise that there are strange forces at work, and that their lives might be in danger… Do NOT touch the tape inside.

House of VHS will debut on DVD in Australia on September 21st, where it will include one of these exclusive ‘faux VHS’ covers. A US DVD will follow on October 11th, with the UK getting the film on January 16th, 2017.

Unfortunately, the US and UK releases will see the film’s title changed to the far blander title Ghosts in the Machine. Blurgh.