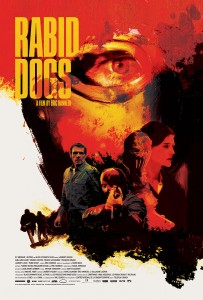 Playing to mixed reviews at last summer’s festivals, Eric Hannezo’s French-made Rabid Dogs was seen by some as a worthy update of Mario Bava’s cult film, and to others a mean-spirited and pointless rehash. Ahead of the film’s New York release on January 22nd (other cities will show the film in the weeks following), the poster has been revealed and it has a super-stylish and sexy seventies flavour. Just feast your eyes on its painted beauty.

Shot in 1974, Mario Bava’s original remained unfinished due to a number of factors, chief of which was lack of funds. Thought lost for many years, Rabid Dogs was pieced together in an alternate cut and released as Kidnapped in 1995, before those beautiful folk at Arrow Video put together the most complete and as-intended cut of the film in 2014. Made in the twilight years of Bava’s career, the film stands alone within the Italian master’s body of work as something powerfully different and thoroughly modern.