The Purge Prequel will Take Things Back to the Beginning 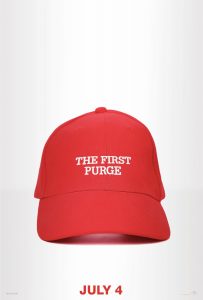 Ever wondered what exactly lead to the creation of the Purge in the first place? It seems like you’re not the only one. The next addition to the Purge franchise will be a prequel and will go back to the beginning, exploring why the Purge came about.

The news broke with a brilliant, simple and political teaser poster that shows a red cap (familiar?) with “The First Purge” printed on it.

The Purge has so far, been a consistently entertaining series and we’ve seen no reason for the bloody fun to stop. Each film has done something different and it seems like the next one will follow suit.

Titled The Purge: The Island, the fourth Purge film will be directed by Gerard McMurray – this is the first time the film won’t be directed by James DeMonaco, but he has written the script – and is set to star Luna Lauren Velez, Melonie Diaz, Mo McRae and Chyna Layne.

The Purge: The Island will be released on 4th July 2018 in the USA, before hitting the UK on 6th July.