A Puppet Master reboot may be on the way but before that, Full Moon head honcho Charles Band will bring to a close the series proper with the eleventh and (supposedly) final instalment, Puppet Master: Axis Termination. With a release date announcement expected soon, we’ve got the first trailer for the film, which concludes the trilogy that began with 2010’s Puppet Master: Axis of Evil.

Band will no doubt be keen to end the cult series in style, and the trailer is filled with bloody mayhem, arresting visuals and appearances from all your favourite murderous puppets.

“Everyone’s favorite pint-sized puppet anti-heroes- Blade, Pinhead, Tunneler, Jester, Six Shooter, and Leech Woman – join forces with a secret team of psychics working as Allied Operatives. Teaming up with Toulon’s bloodthirsty marionettes, these unlikely allies face off against a new pack of evil Nazis and their even more malevolent Axis Puppets in a showdown that will decide the future of the free world!” 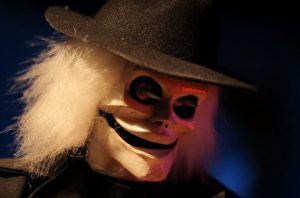 Charles Band wrote, produced and directed Axis Termination. Fans of the long-running series will no doubt be sad to see it come to an end, but it’s kinda nice that as one Puppet Master saga comes to a close, with the imminent reboot – entitled Puppet Master: The Littlest Reich and directed by Wither duo Sonny Laguna and Tommy Wiklund – another is just beginning.