The Punisher Lands His Own Netflix Series 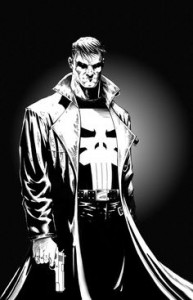 In news that is unsurprising, but no less exciting, The Punisher has landed his own spin-off series on Netflix. Jon Bernthal’s (The Walking Dead, Sicario) Punisher was one of the best aspects of Daredevil Season 2; his complex set of morals made him the perfect character to face-off against Matt Murdock as he, too, has his own inner demons. They were perfect reflections of each other and their opposing, but sometimes similar, belief systems made for some gripping moments.

Steve Lightfoot, an executive producer on Hannibal, will be serving as a showrunner and executive producer for the show. He will also be writing the first 2 episodes. Jon Bernthal will be reprising his role as Frank Castle AKA The Punisher, obviously. Netflix also has original series’ lined up for Marvel’s Iron Fist, Luke Cage and The Defenders, as well as Jessica Jones and Daredevil.

We can’t wait to see what The Punisher will get up to in his own season. Whatever happens, we hope it is even more action-packed and even more violent than what we saw in Daredevil; if that’s possible. More news as it comes!