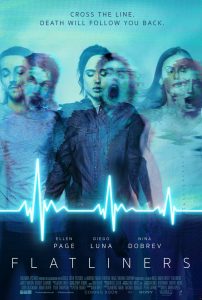 On Thursday, both a new international trailer and poster were unveiled for Niels Arden Oplev’s sequel/reboot to Joel Schumacher’s cult sci-fi chiller Flatliners. One or two other horror sites have bemoaned the lack of overt horror in the trailer although if you’ve seen the 1990 original, I can’t really imagine why you’d expect it. I personally think it looks pretty cool, and very much in keeping with its source film. And the poster is a doozy, too.

Kiefer Sutherland – who starred alongside Kevin Bacon, Julia Roberts and William Baldwin in the original – will reprise his role in the new film, whose cast is led by Ellen Page and Rogue One’s Diego Luna. The main cast is rounded out with Nina Dobrev (The Roommate, The Final Girls), Kiersey Clemons (Bad Neighbours 2), Rush’s James Norton. 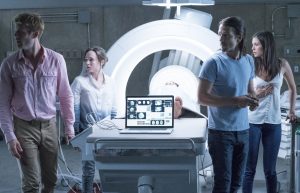 The story concerns a group of young medical students who aim to explore what lies beyond death by stopping each other’s hearts for increasing periods of time. Taking bigger and bigger risks, the group begin to face a paranormal threat as their past sins catch up with them.

The Girl with the Dragon Tattoo helmer Oplev directs from a script by Source Code writer Ben Ripley.