Pulse Director’s Before We Vanish Hitting More Screens This Weekend

Having recently opened on screens in New York and Los Angeles, Kiyoshi Kurosawa’s Before We Vanish is expanding to a wider theatrical release from this weekend. Kurosawa, the master director of J-horror standouts Pulse and Cure, looks to be giving us a funny, profound and unique twist on Invasion of the Body Snatchers with his latest film, which is also his twentieth as director.

Before We Vanish is a very human and, going by the trailer we saw a month back, violent tale of aliens preparing for a full-scale invasion of Earth. Remind yourself of how ace that trailer was below. 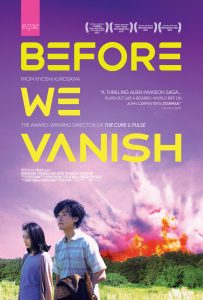 Synopsis:
Three aliens travel to Earth on a reconnaissance mission in preparation for a mass invasion. Having taken possession of human bodies, the visitors rob the hosts of their essence – good, evil, property, family, belonging – leaving only hollow shells, which are all but unrecognizable to their loved ones.