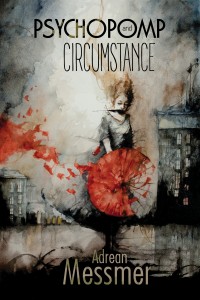 This is not your everyday, run of the mill horror novel. It’s more than that, with an artistry and style to it that’s unusual in the genre. It’s really well encapsulated by the cover design. The cover looks how the book feels, if that makes sense. The book features an unsettling dreamlike tone throughout, and makes you question if you can trust what you’re seeing.

Our protagonist, Nell, is dying from an inoperable brain cancer. She begins seeing the Sewercide Man, the former local serial killer, whose body she found. He claimed twelve victims before taking his own life. Strange things begin happening to her friends. People begin to change and die as an evil propagates through the town. We follow a small group of teenagers who have recently finished high school and are at a crossroads in their lives in more ways than one.

The focus is very much on the characters and their interactions rather than on an overt killer. Their interrelated pasts and the spreading darkness cause difficulty in relationships and communication. Everyone is living with their own demons and it’s quite suffocating. People’s experiences weigh so heavily on them. Another suffocating aspect is the sense of decay and rot present, from Nell’s illness, to hoarding, to buildings in the town. The decay is as present as the darkness claiming them. The sense of fluidity the author has created in the town extends to gender and sexuality.

There is a really interesting and unusual structure with each chapter being told from a different point of view. You’re told at the start of each chapter whose viewpoint it is from. So you’re seeing interactions and relationships progressing in the story from all different angles. Not retreading the same events, but always moving the story forward chronologically.

There is really strong imagery with vivid descriptions throughout, including colors and sounds. Such descriptions even apply to nature, from the uneasiness generated by a description of worms to the foreboding weather. The author uses beautiful language.

The deaths are gruesome and impactful, with the first death especially shocking and unsettling. A pervasive uneasiness and darkness is in almost everyone. Each aspect of the book works in union to generate a wholly unsettling story. There is plenty of heavy content from bullying and sexual abuse to terminal illness. This is a book that’s going to stick with you as you read and requires some investment to get the most out of it.