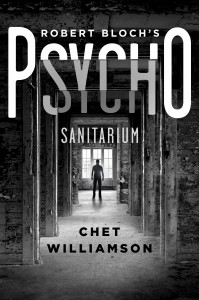 Die-hard Psycho fans will know that Alfred Hitchcock’s 1960 movie was based on the novel by Robert Bloch published in 1959. The screen and printed cult-classic hits lead Bloch to also write and release Psycho II (1982) and Psycho House (1990), two novels that had nothing to do with the movie sequels (II-IV).

We know as fans and readers that the original story ended with Norman Bates arrested for the murder of four individuals; his mother and her lover, young Mary (or Marion) Crane, and private investigator Arbogast, and he is sent to a mental institution for life. While the following book and film sequels are unrelated, they both take place twenty years after Norman is locked up.

In Psycho: Sanitarium, author Chet Williamson continues the story of Norman Bates set in 1960 immediately following the initial arrest. Norman is living in the State Hospital for the Criminally Insane, an institution that has a dark and haunting past of its own. Norman is nearly catatonic and under the care of Dr. Felix Reed whose mission it is to return Norman to a more functional state.

In the hospital, Norman faces abuse and trouble from both staff and fellow patients. It’s during this time that author Williamson paints an almost loveable character of Norman that one can’t help but take pity on. Some good news for Norman comes as a never known twin brother identifies himself and visits Norman. The newly discovered family member, seen at first as a positive light in Norman’s mundane world soon turns out to be a form of darkness in disguise.

In classic Psycho fashion and in following the “mythos” that Bloch created nearly 60 years before, those that do wrong to Norman usually end up dead. Bodies start disappearing while Norman is under watch and locked up behind bars.

This authorised Psycho sequel will delight and terrify the casual and serious Bloch fan alike. Chet Williamson has given life to the most iconic villain of our time in a brand new and exciting way, has left a hearty bloodbath in his awakening and has left us fans hungry for more.