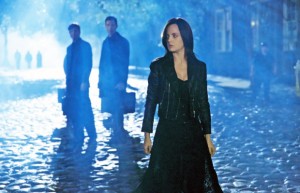 Production has now started on WE tv’s upcoming supernatural TV series, South of Hell with Eli Roth sat in the director’s chair for episode one. The show stars Mena Suvari (Hysteria) as Maria Abascal, a 30-year-old exorcist for hire who is also dealing with a demon that has taken up residence inside her own body and goes by the name of Abigail. As she works with her unwelcome guest, Maria will discover how personal her battle with evil has become and how far Abigail will go to protect them both.

Starring alongside Suvari is Zachary Booth (Keep the Lights On) playing Maria’s brother and closest companion who has a few of his own real-world demons: an addiction to heroin and a lust for troublesome women. The show also features Bill Irwin (CSI), Drew Moerlein (V/H/S), Lamman Rucker (Meet the Browns), and Paulina Singer (How to Make It In America) with recurring cast members including Lydia Hearst (Cabin Fever: Patient Zero),Slate Holmgren (The Amazing Spider-Man 2) and Lauren Velez (Dexter).

Whilst Eli Roth is only on board to direct the first episode he is warming up the chair for a plethora of top helmers such as Ti West (The Sacrament), Rachel Talalay (Doctor Who), Jennifer Lynch (The Walking Dead) and Jeremiah Chechik (Helix) who are all on board to direct subsequent episodes. South of Hell is scheduled to air some time next year on WE tv.