Principal photography has wrapped on the Australian supernatural horror film The School from director Storm Ashwood. Ashwood is making is feature directing debut, but he has directed a handful of short films and worked on the technical side of films including One Eyed Girl and Horizon.

Synopsis:
The School follows Amy, an attractive, successful surgeon, who struggles to cope with her emergency room duties and those of a young mother looking after her hospitalised son who has fallen into a coma. After being reprimanded by her boss, Dr. Wang, for obsessively believing her son will wake up, she becomes trapped in a coma/purgatory of her own – The School – where children from her past emerge to taunt and test her to her core, putting in doubt whether Amy will be able to save her son and leave The School.

The School has been filmed at the oldest mental asylum in Australia called Gladesville, so the location itself must have been creepy enough for its cast members. A couple of images below show the inside of the asylum and the horrifying children that have been sent to taunt Amy. 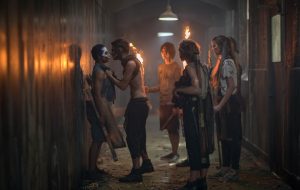