Here’s something rather exciting for all you cheapo trash fans. In 1990, exploitation outlaw James Bryan – director of gonzo slasher classic Don’t Go in the Woods – shot his final film, a shot-on-video haunted hotel horror titled Jungle Trap. The film however, was never completed or released, and remains a much-discussed curio among Bryan’s fans. Now though, the film can finally be seen by human eyes, thanks to Mondo and Bleeding Skull Video, who have given it some final touches and are releasing it on both DVD and VHS! 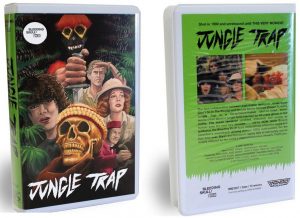 Here’s what Mondo have to say about their release of the film, which starred the late exploitation queen Renee Harmon, who is probably best known for Frozen Scream, but worked with Bryan a few times, including on The Executioner Part II, Lady Street Fighter and Hell Riders.

“The final collaboration between exploitation demigods James Bryan (Don’t Go in the Woods) and the late Renee Harmon (Frozen Scream), Jungle Trap is a decapitation-fueled, shot-on-video horror masterpiece about a jungle hotel haunted by kill-crazy ghosts in loin cloths. The movie remained unedited, unscored, and unseen by human eyes for over two decades . . . UNTIL NOW. Under Bryan’s guidance, the Bleeding Skull! team meticulously edited the movie and recorded a soundtrack utilising vintage 1980s synthesisers. For the first time ever, Bryan and Harmon’s raging slab of anti-sanity can be deeply enjoyed by the world’s most adventurous viewers. That’s you.” 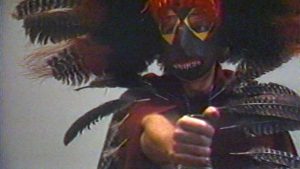