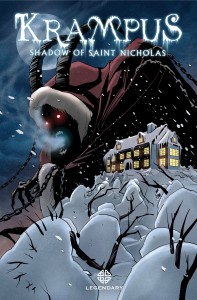 Ahead of the release of festive horror Krampus, Legendary Comics have put together a graphic novel titled Krampus: Shadow of Saint Nicholas. The story works as a prequel to the film, so it would be worthwhile to give it a read before you catch the film in a couple of weeks.

The graphic novel brings together four interwoven creepy Christmas tales and, as you’d expect, the Krampus and his friends come out to play. Well, they come out to see who’s been naughty or nice and punish those that have been wicked. It has been written by Krampus screenwriters Todd Casey and Zach Shields, who must have had a lot of pun piecing together stories about evil snowmen, mischievous elves and writing generally nightmarish scenarios for their characters. 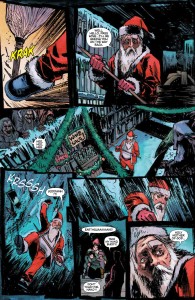 Synopsis:
At the most wonderful time of the year, a drunken mall Santa comes under siege from some very mischievous Christmas spirits, a dysfunctional cop becomes trapped with the man who ruined his life and the wealthy town “scrooge” must face the shadows from his past as his home comes under invasion from the homeless. This Christmas, Krampus will make sure they all get what they deserve.

Have a gander at the preview pages below and see Santa find himself in a bit of a tight spot. You can buy Krampus: Shadow of Saint Nicholas now, and be sure to catch Krampus when it is released on 4th December 2015.