Prepare For Demolition With Second Attack On Titan Teaser 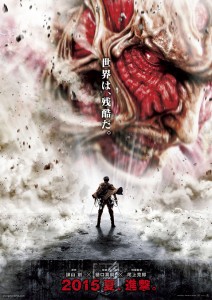 The second teaser trailer for Toho Studio’s Attack On Titan has been released, and it is certain to destroy your expectation walls.

Toho and director Shinji Higuchi (The Floating Castle) have been working on the two-part adaptation of the popular Japanese anime series Attack On Titan. From the teaser trailers we’ve been given, it’s clear to see there will be plenty of annihilation, brutality and skinless versions of the Big Friendly Giant.

Attack On Titan will be released in Japanese theatres on August 8th, followed by the release of the second part, End Of The World, on September 19th 2015. The official UK release date has not been announced, but we will keep you updated.

Synopsis:
After 100 years of trying to survive against the flesh eating Titans, and living safely behind an enormous wall, the human population come under threat once again after a Titan destroys the wall. With a horde of Titans pouring through, Eren and his childhood friend, Mikasa, must rebuild the wall, find the rare and precious explosives, and save mankind from being eradicated by the hungry giants.