Prepare to Fire with New Poster for Sweet Virginia

A new poster has been revealed for the thriller Sweet Virginia, which stars The Walking Dead and The Punisher’s Jon Bernthal and It Comes at Night’s Christopher Abbott. The film has been praised for the striking performances from its cast and the trailer – which you can check out below – definitely showcases a taut thriller led by its strong leads. It looks dark and delicious, like an even more intense Pulp Fiction. 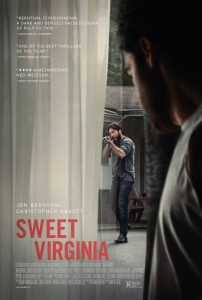 Synopsis:
A mysterious stranger sends shockwaves through a close-knit community in this nerve-jangling slice of raw suspense. In the wake of a triple murder that leaves the residents of a remote Alaskan outpost on edge, tightly wound drifter Elwood (Abbott) checks into a motel run by Sam (Bernthal), a former rodeo champion whose imposing physical presence conceals a troubled soul. Bound together by their outsider status, the two men strike up an uneasy friendship—a dangerous association that will set off a new wave of violence and unleash Sam’s darkest demons.

Sweet Virginia will be receiving a limited release in the USA from 17th November 2017. The rest of the world will have to keep a look out for a release in their neck of the woods, sadly.