If there’s ever been a movie series that has launched with the momentum of a thousand nuclear wars, it’s The Dark Knight. But before that, it was Predator. Originally released in 1987, the first Predator movie raked in $12 million in its first weekend alone and we’re talking 1980’s money! That’s like 25 million in today’s bucks. Despite its poor critical reception, fans absolutely fell in love with the creatures’ murderous way, helping to create a multi-million dollar industry of toys, comics, novels, games, and, of course, movie sequels. The Predator comics, much like its sci-fi companions Aliens and Star Wars (before the Disney buyout), are handled by the multi-talented folks over at Dark Horse Comics, who have held the comic publishing rights since 1989 and have released a good couple hundred issues of extended Predators universe. Predator: Hunters is the newest addition to the mythos and while it does right by the by the creatures ferocity, it falls short on adding anything new to the overall world or the human characters that inhabit it.

The comic starts off with a pre-amble about a group of men who are trapped on an island with one of the hunters. Quickly chased to the ends of the island, two victims mercilessly slaughtered while the other one barely survives the encounter. Suddenly, the comic flashes over to our lead, a man overworked and underpaid in the ass end of the Texan desert. Thinking his past is far behind him, he is soon approached by a group of hunters eager to use his “expertise” in hunting the most dangerous prey, the Predator! But does he have it in him to pull off one last job or has he left that life for good?

This comic is either super awesome or kind of lame, depending on what you want from your Predator comic. If you are super into the Predator character and love the action side of it, then this comic is right up your alley. It stays very true to the initial appeal of the monster, complete with the severed heads as trophies and the voice mimicking. Predator is a very primal creature and the creators really put their all into bringing him to life. The human characters don’t linger too long on conversation, but are instead a tough-talking, head-butting, group of mercenaries that aim to simply to get the job done any way possible. It tapped into that perfect action formula that made the initial Predator movie so popular. 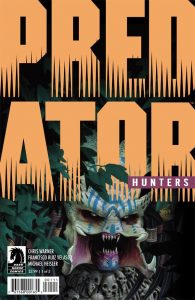 On the other hand, aside from the action and dick-slinging, there’s not much else going on. The characters are very one dimensional, almost like a produced boy band. You got the tough one, the quiet one, the wild card, and the young one. Twenty pages into the comic, they even start regaling each other with their back stories, which not only seem to be too early of a reveal, but really only exist to make the characters even tougher. This guy killed a predator in Ira and that guy is a drug cartel boss who killed an entire platoon of them! It’s super ridiculous. If you’re looking for something that it’ll expand on the Predator universe or on the people that have to live with them, it’s not for you. It mostly focuses on telling an action story. Even the art, while definitely professional, is the exact amount of talent when you want to make a fast paced comic but not have it stand out too much (though the Predator does look bad ass). All in all, take Predator: Hunters #1 with a grain of salt.