The powerful zombie drama Cargo is finally getting a release in Australia. The film hit Netflix earlier this year and proved – as with the greatest parts of The Walking Dead and films like Maggie – that zombie flicks don’t have to be filled with gore and guts to be great.

Cargo followed a man played by Martin Freeman, as he desperately searches for a safe place for his daughter during a zombie apocalypse.

Directed by Ben Howling and Yolanda Ramke, the feature film was based on the short film of the same name. The short is an extremely powerful and a great example of minimalist filmmaking. A million words are spoken with the slightest action and the choice of music is wonderful. It’s a stunning short that is quite gruesome and very thought-provoking as it thrusts the audience in to a refreshing and hard-hitting scenario. 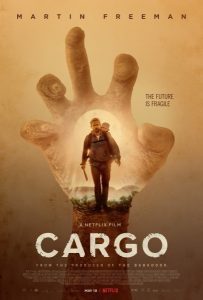 Cargo will be released in Australia on 5th September 2018.