Poster for Winchester: The House that Ghosts Built Builds the Terror

A new poster has been unveiled for the newly-titled Winchester: The House that Ghosts Built and it builds upon the terror that lies in the building’s foundations. Starring Helen Mirren, Winchester follows a woman who believes she is being haunted by the victims of the Winchester repeating rifle. She believes that building a huge house with many rooms will keep the ghosts at bay and herself alive. 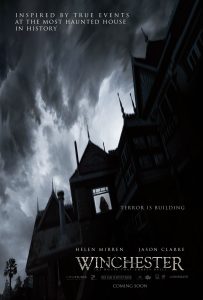 The story is based on true events and the house exists in San Jose, California. The real Sarah Winchester started to build the house in 1884 and working never ceased until her death in 1922. It’s a fascinating true story and Helen Mirren’s inclusion could be a great stamp of quality for the film.

Jigsaw’s Michael and Peter Spierig are directing the film which additionally stars Jason Clarke and Sarah Snook. If Jigsaw proves to be a warranted and entertaining addition to the Saw franchise, then colour us even more excited for Winchester: The House that Ghosts Built.

Winchester: The House that Ghosts Built will be released on 2nd February 2018 in the USA and 2nd March 2018 in the UK.