Poster for VHS-centric Beyond The Gates is Pure Retro Beauty

VHS is getting a lot of love these days. With video tape collectors growing in number and feature length documentaries such as Rewind This! and Adjust Your Tracking chronicling the resurgence, as well as a popular series of horror anthologies, it feels as though the format is far from obsolete.

Recalling the trend for VHS-based board games that gave us Atmosfear (known as Nightmare in the States) is Beyond The Gates, a new horror film for which this beautiful, retro poster has just been unleashed. The feature debut of director Jackson Stewart, the film stars Brea Grant (Halloween II), Chase Williamson (The Guest) and Graham Skipper (Carnage Park), along with horror icon Barbara Crampton, who also produces. 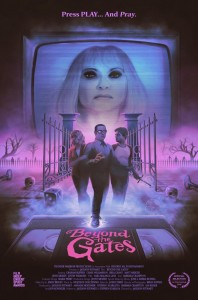 Being a compulsive VHS hoarder myself, I’m struggling to contain my excitement over here, and this awesome artwork together with the following synopsis is really only adding fuel to the flames.

Two estranged brothers reunite seven months after their father’s disappearance to liquidate his anemic video store. While there, they unearth an old VCR board game that acts as an inter-dimensional hub to a nightmare world where their father’s soul is trapped and can only be saved by playing the game. The film is an adventure horror that pays loving tribute to the VHS format, video stores, and board games of the era.

Beyond The Gates is looking towards an October 2016 release. A limited run VHS release will surely follow.