The first two stills have arrived for comedic Canadian shocker Dead Shack, along with some quite beautiful festival art. The film is directed by Peter Ricq, the creator of animated series’ Freaktown and The League of Super Evil. Dead Shack, Ricq’s debut narrative feature, is said to have something of an Amblin vibe, albeit while plunging far darker depths than The Goonies. 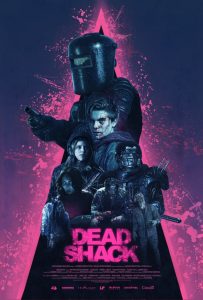 Synopsis:
A group of teens on a weekend getaway at a secluded cabin in the woods soon find themselves fighting off a serious threat to their lives. Not only that they must save their hard-partying, drunk and stoned parents from a predatory neighbor who is hellbent on feeding them all to her undead family.