The official poster is here for Demonic, a new supernatural horror movie from writer-director Neill Blomkamp (District 9), and it would appear that the events we’re about to witness are not a dream… but not reality, either. 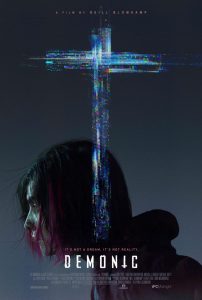 In the film, a young woman unleashes terrifying demons when supernatural forces at the root of a decades-old rift between mother and daughter are ruthlessly revealed. The cast includes Carly Pope (Elysium), Chris William Martin (Aliens vs. Predator: Requiem), and Michael Rogers (Siren).

Demonic is set for a theatrical, On Demand, and Digital release in the US on August 20th. UK audiences can catch it a week later on August 27th.