While Bruckner (who has since directed acclaimed horror anthology Southbound) remains onboard as an executive producer, the directorial reigns have been passed to Gregg Bishop, himself no stranger to the V/H/S franchise, having helmed the Dante the Great segment of V/H/S Viral. 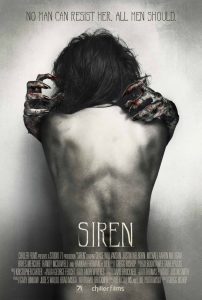 SiREN is a horror-thriller about Jonah, an apprehensive groom-to-be whose bachelor party turns into a nightmare when he frees a seemingly innocent victimised girl locked up in a supernatural sex club. Her ruthless handler and proprietor of the sex club will stop at nothing to re-capture his prize. Jonah struggles to rescue the girl only to discover it is he who needs to be rescued as he comes to the realisation that she is a dangerous fabled predator who has chosen him as her mate.

SiREN hits US cinemas on December 2nd, with VOD, Digital HD and DVD releases to follow on December 6th, through Chiller Films.