As if the huge 25 foot Great White shark in JAWS wasn’t bad enough now we have a beast roaming the ocean with a nuclear missile attached to it! yep, meet Atomic Shark!

Synopsis:
In ATOMIC SHARK General Dale “The Charger” Hamilton has an intriguing plan to become the next leader of America. After hiring terrorist Karl Schmidt the two share an interest in a marine biologist Dr. Mann who has created an electronic device that attracts sharks making them attack anything emitting the signal even ships or submarines, which is precisely why General Dale and Schmidt are interested in the device, along with a huge 23 foot great white shark that Dr. Mann has captured.

Knowing the President of the USA is scheduled to christen a new nuclear submarine General Hamilton has the means to attach Dr. Mann’s invention to the sub. Leaving Schmidt to outfit the Great White with lethal cargo and send it on its mission. All that needs to occur is for the sub to destroyed, emitting a radioactive cloud that will cover all of Washington D.C and most of North eastern seaboard allowing General Dale and his troops to take over the reins of chaos. Controlling the Vice President through blackmail all that really stands in his way are agents Wilkes and Dorcet, who currently have no idea the deadly mission they’re about to face.

Atomic Shark is just wrapping up production stateside and a new official one-sheet has just been released which you can check out below: 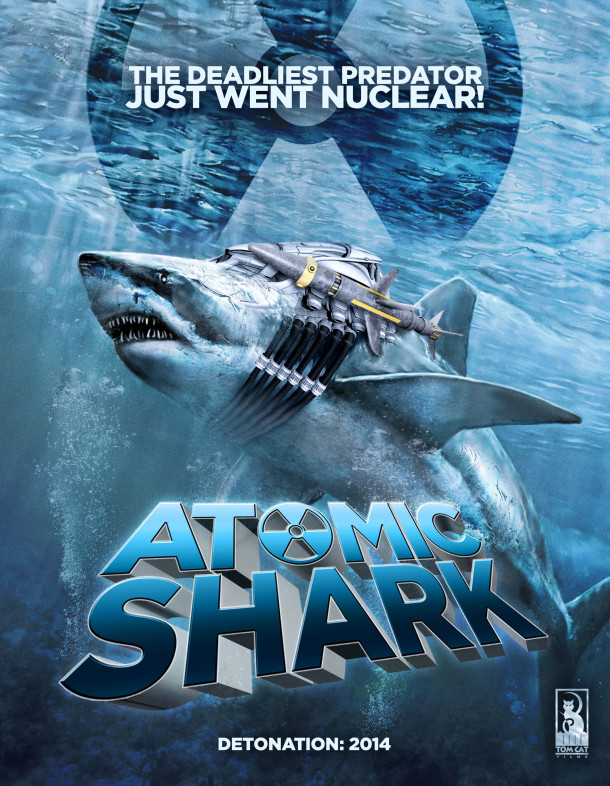