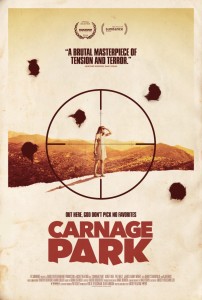 A new poster has been unleashed for Carnage Park, a thriller from director Mickey Keating (Pod, Darling) who has described the film as, “[my] total love letter to Peckinpah, and Deliverance, and ’70s survival movies”. The poster has an unmistakable vintage design and channels a feeling of desolation and isolation as it, quite literally, takes aim and focuses on a lonesome Ashley Bell.

Micky Keating is unstoppable; since Ritual, 2015’s Pod and Darling, plus the upcoming Carnage Park, he has recently wrapped filming on his serial killer thriller Psychopaths, which follows the lives of different killers over a single night. With each feature arriving soon after the last and covering an entirely different topic, he is definitely showcasing his versatility, creativity and a clear love for the genre that we, too, adore.

Synopsis:
The year is 1978. After botching an ill-conceived bank robbery in a desolate California town, two wannabe crooks named Scorpion Joe (James Landry Hébert) and Lenny (Michael Villar) flee the scene with a hostage, Vivian (Ashley Bell), and lead the local lawmen on a dangerous high-speed chase. With his partner suffering from a gunshot wound and losing blood fast, Joe takes to the back roads to dodge the heat, but he unwittingly steers them into the path of a far more dangerous evil: a psychotic ex-military sniper who doesn’t take kindly to strangers. Thrust into a wicked game of cat and mouse with a highly trained and mentally imbalanced killer, they begin a harrowing fight for survival.

Carnage Park recently had its world premiere at Sundance, later screening at SXSW where its rights were soon acquired by IFC Midnight. The film additionally stars Darby Sanchfield, Pat Healy and Alan Ruck and is set to be released in select US cinemas and on VOD on 1st July.