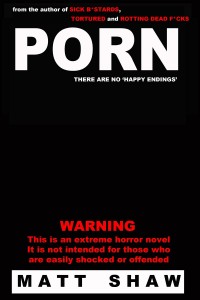 This starts in a similar fashion to the other stories I’ve read by Matt Shaw, disturbing first person narrative, flawed characters in abundance, a story that starts near to the end and then follows two timelines in the present and right back at the start of the tale, bringing them together with some sort of wicked twist along the way. And PORN does just come with a wicked twist, one that you will not see coming, a masterstroke that turned an immensely satisfying and depraved revenge trip into a stomach hits the floor moment with full appreciation for what the author has pulled off.