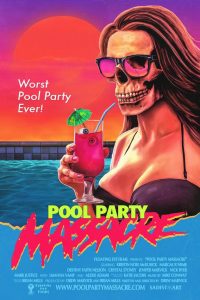 Upon first sight of the new poster for Drew Marvick’s Pool Party Massacre, you’d be forgiven for thinking you’d stumbled across an overlooked flick from the golden age of the slasher. Until you notice the website address at the bottom of course.

Marvick’s micro budget love letter to both 80s slashers and the VHS tapes on which the majority of them found their lasting home, Pool Party Massacre marks the director’s feature debut, following his splatterific 2015 short Scared to Death. The film, which Marvick also wrote and produced, stars LeeAnna Vamp, Alexis Adams, Mark Justice and John Molinaro.

Paying tribute to the slasher flicks he loves while avoiding stepping into self-referential or spoof territory, Marvick’s film is set in the present day, and plays out in real time, as a bunch of snobbish socialites have their little backyard pool party ruined with the arrival of a mysterious killer. 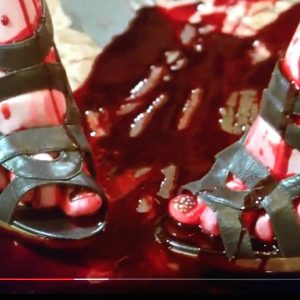 The poster art is the work of Marc Schoenbach, who runs the company Sadist Art Designs. Channeling that lurid 80s VHS cover look better than anyone, Schoenbach also recently created equally awesome posters for the likes of The Barn and The Diabolical.

Synopsis:
What started out as a relaxing summer day by the pool for a group of high maintenance young socialites quickly becomes a nightmare when an unknown killer begins stalking and murdering them one by one.

Pool Party Massacre will be looking for a release sometime in 2017. Keep your eyes peeled for a trailer.