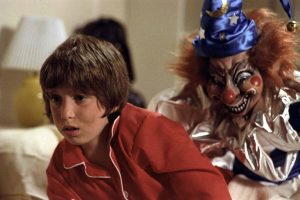 After being harassed by a scary clown doll and abducted by a monstrous tree in Poltergeist as little Robbie Freeling, actor Oliver Robins appeared in Airplane II: The Sequel, 1986’s Poltergeist II: The Other Side and very little else. He’ll be gracing the darker side of cinema again very soon however, in upcoming psycho-thriller Celebrity Crush, which he will also direct from his own script.

Robins will star as former child actor Jonathan Blaklee, opposite Alissa Schneider (Paying Mr. McGetty) who plays a sociopathic fan obsessed with the 1980s horror flick Chain-Face Clown in which he starred. After meeting Jonathan at a horror convention, the troubled fan imprisons the ex-child actor with the misguided hope Jonathan will one day fall in love with her.

“I’m very excited to have the opportunity to act again in this very dark thriller,” Robins said in the film’s press release. Aside from a cameo in 2008 comedy Man Overboard, which he directed, Robins has not appeared on screen since Poltergeist II over 30 years ago. He is due to begin shooting Celebrity Crush in St. Petersburg, Florida in late July.