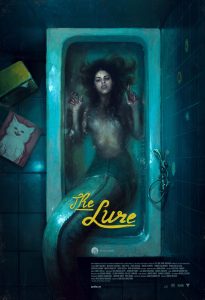 Genre-bending Polish horror/comedy/musical The Lure is out in selected US cinemas this week, so feast your eyes on this beautiful new poster.

Released in Poland back in December 2015, the film put in a long festival run beginning at last year’s Sundance and stopping off at the Sydney Film Festival, Fantastic Fest, the Toronto After Dark Festival and the Stockholm International Film Festival among many others.

The feature debut of director Agnieszka Smoczynska, the film offers a bold and bloody twist on Hans Christian Andersen’s The Little Mermaid, introducing a pair of carnivorous mermaid sisters who long to experience life on land. Leaving the ocean, they find themselves in an alternate ’80s Poland where their enticing siren song and mysterious auras make them overnight sensations on the glitzy/sleazy cabaret/strip club scene. When one falls for a human, the bonds of sisterhood are tested, and the lines between love and survival get blurred.

Described in the press release as “a savage coming-of-age fairytale with a catchy new-wave soundtrack, lavishly grimy sets, and outrageous musical numbers, The Lure explores its themes of sexuality, exploitation, and the compromises of adulthood with energy and originality.”

Past its limited US big screen run (which begins on February 1st at New York’s IFC Center), further release details have yet to emerge.