It’s getting harder and harder to keep up with the new surrounding Alien and Prometheus, with Neil Blomkamp being involved with Alien and then not being involved, and then Ridley Scott planning 1,000 (not literally) sequels to Prometheus and then the title adding ‘Alien’ (literally). What is going on!?

However, there is a light amidst this crazy darkness and Fox have, finally, given us some official news. Prometheus 2 is now called Alien: Covenant and the synopsis for the film can be read below.

Synopsis:
Ridley Scott returns to the universe he created in ‘Alien’ with ‘Alien: Covenant’, the second chapter in a prequel trilogy that began with ‘Prometheus’ — and connects directly to Scott’s 1979 seminal work of science fiction. Bound for a remote planet on the far side of the galaxy, the crew of the colony ship Covenant discovers what they think is an uncharted paradise, but is actually a dark, dangerous world — whose sole inhabitant is the “synthetic” David (Michael Fassbender), survivor of the doomed Prometheus expedition.

The most surprising part of that plot is the absence of Noomi Rapace’s character Elizabeth Shaw. She was last seen escaping from LV-223, so maybe we can assume she got home safe and lived happily ever after, never venturing in to space again. However, just because she’s missing from the synopsis doesn’t mean she won’t be making an appearance…

A few days ago it was reported that Rebecca Ferguson (Mission: Impossible Rogue Nation) has been in talks to join the film, which could suggest that a new woman is going to be in the lead. Alien and Prometheus are, of course, known to have a strong female at the core and hopefully Alien: Covenant will be no different. 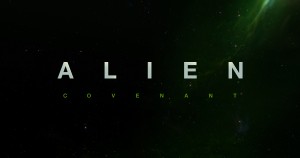 You can check out the logo for Alien: Covenant on the right; it is reminiscent of Scott’s original Alien, but is nothing really to shout about. Something that is worth shouting about, however, is the release date which is set for October 6th 2017. That truly does seem like an age away. We do hope that everything is now set in stone and we won’t be in for any more title changes or release date shifts or anything else Ridley Scott and Fox could consider.