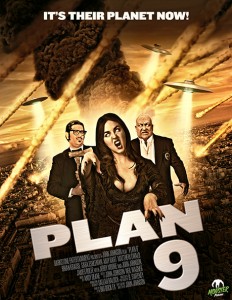 Long before the accidental brilliance of Troll 2, and even longer before the deliberate badness of Sharknado and its worthless ilk, one man seemingly had the monopoly on mesmerizingly bad cinema – Edward D. Wood Jr. His endearingly lousy 1959 disasterpiece Plan 9 From Outer Space is the Citizen Kane of bad cinema, the yardstick by which all other bad films are measured. And now, for God-knows what reason, his opus has been remade.

Directed by the actually rather prolific John Johnson (Shadowhunters, Skeleton Key, numerous horror shorts), Plan 9 stars Brian Krause (Sleepwalkers, Charmed) and Matthew Ewald (Terminal Error), as well as minor horror royalty in the forms of Mike Christopher (Dawn of The Dead’s ‘Hare Krishna Zombie’) and Camille Keaton. Keaton, who played Jennifer in 1978’s I Spit on Your Grave, has recently finished work on I Spit on Your Grave: Deja Vu, which reunites her with original director Meir Zarchi.

Plan 9 will become available on VOD from February 16th, and on disc sometime in May.

The official synopsis reads:
“Plan 9 is the story of Nilbog, a small town with a big story: the beginning of an invasion! However, instead of lasers, spaceships, and epic force, these aliens have a different plan for the inhabitants of Earth: to resurrect the dead as their own army set with but one goal… to wipe out all mankind! On this Halloween night only the townsfolk stand in the way of total domination. From the police department to those trapped in a convenience store, and even those trying to stay alive in the streets, this night will decide the fates of all who walk the planet and thought they were the top of the food chain.”

The best bad films are those whose (often deluded) directors set out to make something great; I have little time for the intentionally terrible CGI monsters so often seen on the SyFy Channel. If a filmmaker sets out to make a terrible film, the resulting terrible film has fulfilled its aims, and is therefore not ‘bad’, but merely shit. Time will tell where Plan 9 will fall.