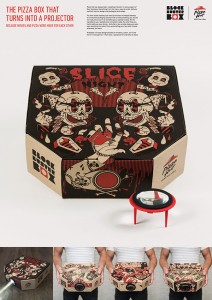 It’s not officially horror news, but we’re sure this will catch the attention of all film fans, no matter what your preferred genre is. Pizza Hut have clocked onto the trend of movies and pizza, as they bring out the “Block Buster Box”, which transforms your pizza box into a home film projector.

This is currently only available in Hong Kong, but if there’s enough popular demand it won’t be long until Pizza Hut expand the availability and hopefully bring it to all of us. Although there are potentially some major flaws with this, it is still one of the most awesome ideas to happen for us film addicts, and it would be a novelty way to watch someone being chopped in half whilst eating your pizza.

How the Block Buster Box works:

·      Once you’ve gotten your box, you pop out the hole in front of the box and then insert the provided lens to make it magnified.

·      Using your smartphone you scan the code on the side of the box, put your phone on the stand on the inside and begin to watch the supplied film.

We’re hoping it will be a feature that’s improved and then brought closer to home, also making it possible to watch other films than just Pizza Hut’s own. This is a seriously sweet concept and we’ll keep our fingers crossed that it comes our way!