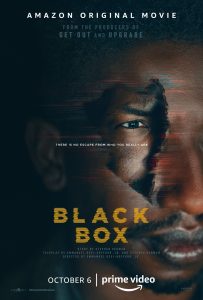 The wait is over as Amazon Studios and Blumhouse Television have opened the doors to “Welcome to the Blumhouse,” an eight film anthology series available on Amazon Prime. The studios joined forces with the deliberate goal of giving diverse, genre filmmaking talent a home via which to reach the huge audiences they deserve.

Today sees the release of the first two features, one of these being Emmanuel Osei-Kuffour’s Black Box. The film follows Mamoudie Athie who plays a single father left with no option but to resort to agonising experimental treatment after losing his wife and his memory in a car accident. Whilst the initial results are promising, he starts experiencing some sort of side effects that cause him to question who he really is.

With Black Box releasing today (October 6), SCREAM joined a Zoom meeting with Phylicia Rashad (Creed, “13 Reasons Why”) and Mamadou Athie (Underwater, Jurassic World 3) to discover their character’s who are both willing to go way beyond the call of duty to get their lives on the tracks they desire.

SCREAM: Phylicia, you have often said that you enjoy acting because it allows you to look into yourself and discover other people. Here you get to do that but your main task is to help Mamadou’s character rediscover himself.

Phylicia Rashad: It was a very different role for me. It’s not the first strong woman I have portrayed but this one is in the field of neuropsychology and she’s highly-esteemed in her profession. There is something that she has conceived and been working towards for a number of years that is cutting-edge and breakthrough that will mean a lot for people with memory loss. She’s reached a point where she has introduced it and she is ready to implement it. At the same time, she is also vulnerable to her own personal agenda.

What came across for me in my discussions with the director is how much he respects his parents and the regard in which he holds his mother. I think this really influenced the creation of my character – his regard for her intellect and his regard for her heart. And in the film, he doesn’t say everything. You just get it in little bits and pieces which I thought was really kind of nice.

As you say Phylicia, although your character has a personal agenda, you need to come across as a respected, trustworthy scientist. How did you approach this to find the right balance?

PR: I grew up in Houston, Texas and my father was a dentist. I grew up around a number of dentists, doctors, lawyers, architects and teachers. There were all these professionals in our community. Being a person that can be trusted and who has some knowledge of what they are talking about and holds some level of authority is what we look to, especially when we are in need of help. That’s what we look for in everything we do so it wasn’t really difficult for me to imagine or understand a person in whom people would invest truth or belief. I did have to do some research on treatments and therapies and terms to really understand what they meant and to go into what that is. And I love the director for this because he wrote all this stuff because he’s studied all these things. He is such an intelligent man. He reads and he looks and watches and listens and takes so many things in. His direction was quiet, still and very deep. He is so meticulous in his attention to detail. His vision and his perception of things are not commonplace at all.

MA: While the circumstances sound familiar, they are not. We’re not dealing with just any kind of memory loss so there was nothing really for me to research as such. I could superimpose some other kinds of amnesia experience but that wouldn’t necessarily apply so we really just used the script as our guide, as you always should. Emmanuel did speak to some medical professionals but I asked him if he thought it would be a good idea to speak with any but we just decided that it didn’t really apply. 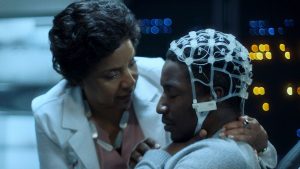 Phylicia, you have to hypnotise Mamadou and walk him through his experiences inside the Black Box. He has a headset on and you are only imagining what he can see based on his descriptions. Was acting those scenes as challenges as they looked?

MA: That wasn’t actually all that confusing for us. We’d do the black box scenes separately and then the other scenes, but they kind of played themselves really and Miss Rashad is such a wonderful actor that there was really nothing to worry about. I’m sorry I don’t have a more exciting answer for you (laughs) but that’s the truth.

PR: It was very interesting because I couldn’t see what he was seeing, nor could I imagine it. But I could guide him through suggestion and there were certain things that I was guiding him towards and then there were things that happened that were a little unexpected (laughs). But I won’t say more that that because I don’t want to give it away.

MA: That little unexpected would be Troy James! That was horrifying to see up close. He’s brilliant and can do things with his body that people just can’t do. They had video of what he did before we filmed our scenes but I didn’t want to see that because why waste a reaction when it can be caught on film? He’s so great at it and he got me every time, not just the first time I saw him.

The film highlights the importance of family and also how children have this almost supernatural capacity to mature in the face of challenges – the latter beautifully portrayed by Amanda Christine who plays Mamadou’s daughter.

PR: Amanda is a spark! I only had one scene with her but Mamadou always speaks about her with such appreciation. And it’s very interesting that you have acknowledged that she is the most mature character in the entire film. This was a conscious creation of the writer which I think is a beautiful thing.

MA: She’s wonderful. We just got on set and figured it out. Emmanuel told me beforehand that she was really great so I believed him and he was not lying! It was just another of those immediate simpatico things. She’s a remarkable young actor.

And then our whole mission was to tell a story about family and it wasn’t necessarily in relation to one family or another. We never thought about this as a genre film. We just saw it as the story and then whatever genre elements there are we respected them and did them fully but that’s not what we were going to limit ourselves to. So I’m glad that you mentioned that as that was our goal. It was a family story at the end of the day.

BLACK BOX is one of eight films in the “Welcome to the Blumhouse” series, and premieres worldwide today (October 6) on Amazon Prime.