There are, as you’d imagine, no shortage of Freddy Krueger action figures out there. Wes Craven’s most celebrated creation is one of horror cinema’s most iconic villains after all. In shorter supply are figures of the Elm Street series’ other characters, although a petition is taking off for one particular survivor to be immortalised in plastic, and Scream are very much behind it.

One of the true stars of the franchise, Lisa Wilcox headed the (non-murderous) cast of both 1988’s A Nightmare on Elm Street 4: The Dream Master and the following year’s Part 5: The Dream Child, as Alice Johnson. A tough but relatable heroine, Alice is the only lead character of the franchise to survive two consecutive showdowns with Freddy; a claim that cannot even be made of Heather Langenkamp’s Nancy.

Time has been pretty kind to Elm Street’s fourth and fifth entries, the sequels picking up increasing favour among fans as the years pass. The chance to have a six-inch Alice stood on the shelf alongside those various Freddies then, is not one to pass up. And it’s long overdue; Alice plays second fiddle only to Nancy in terms of Elm Street’s heroines. 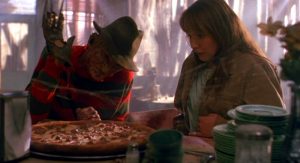 Lisa Wilcox (interviewed in Scream 36) herself is backing the petition for an Alice figure, which you can (nay, must) sign over at the actress’ website here.

Alice has already bested Freddy twice; let’s give her a shot at the dream stalking child killer in one of his factory-made incarnations.