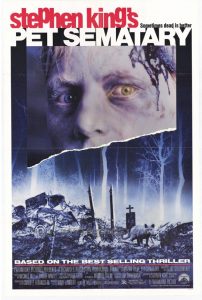 Stephen King – who celebrates his 70th birthday this month – is really the master of modern American horror, whose brand of dark but ultimately hopeful stories have dominated the market for the last 50 years. King’s novels have been adapted into some of the most influential horror films of all times, and although Pet Sematary never quite reaches the same dizzying heights as some of the better adaptations, it remains one of King’s bleaker films, posing some interesting questions around loss, grief and how we process personal tragedies.

When Louis Creed – a doctor at the University of Maine – relocates his family to the rural town of Ludlow, it isn’t long before he discovers a pet cemetery behind their new home. After witnessing the death of a patient, Louis soon begins to be haunted by dreams and visions, all of which direct him towards the cemetery, and particularly, to a Mi’kmaq burial ground that stands behind it. It is only when the family cat is killed by a truck that Louis begins to take these visions seriously, and after burying the cat in the cemetery, discovers that the soil has the power to raise the dead. Jud Crandall – Louis’ next-door neighbour – explains that those who come back to life are inherently changed by the experience, and advises him to forget about the cemetery. Louis agrees, but when his youngest child is also killed by a truck, Louis disregards Jud’s warning, sparking a chain reaction which he is then unable to stop.

The main focus of Pet Sematary is centred around the grieving process, and the various ways in which we react to the death of a loved one. As a doctor, Louis struggles to reconcile his own spiritual beliefs with his daughter’s need for comfort, and he disagrees with his wife’s desire to shield the children from learning about death. In spite of this, it is Louis’ inability to manage his own suffering that leads to the eventual downfall of his family. At Gage’s funeral, the characters all react differently to the child’s death – Jud drinks; Rachel is hysterical; Louis is violent and aggressive – with each character inhabiting a different stage of the grieving process. In this way, the film functions more like a cautionary tale, alerting the audience to the possible dangers of not processing loss in a healthy or constructive manner.

But Rachel, Louis’ well-meaning wife, is perhaps the most interesting vehicle for this idea, and her backstory is so morally questionable that she unwittingly adds another dimension to the themes that the film explores. In one scene, she explains to Louis that, as a young girl, she was entrusted to care for her sister Zelda, who was suffering from a severe form of spinal meningitis. Being so afraid and repulsed by her deformed sister, Rachel watched as she choked to death, before breaking out into peals of laughter. Louis assumes that she tells him this story with some degree of guilt or shame, but Rachel remains to be haunted by Zelda’s ghost, and is just as revolted by her as she was as a little girl. Zelda then is established as Rachel’s dark twin, her shadow, reflecting everything that she fears. Narratively, we know that Rachel has to die for this, and it is ironic that she to is horribly disfigured in the final scene of the film.

It is also possible to read Pet Sematary as a criticism of the Indian Removal Act, warning against using tribal spiritualism for one’s own personal gain. The Mi’kmaq burial ground is in the woods – an unknown distance from the cemetery – and none of the characters seem to know anything about it; Jud appears to have found it by accident. It is suggested that Louis does not have any spiritual beliefs, and as a doctor, has little time for that which cannot readily be proved. Still, when driven by grief, Louis exploits the sacred land, taking the magic of the native people for himself – resulting in disaster for those around him.

Pet Sematary is an interesting film, but this is thanks in large parts to King’s source material. The movie is slightly too campy to be taken seriously, and it often careens into melodrama in an attempt to make us care about the characters. Other elements feel slightly reductive too. Pascow’s ghost feels like a less-effective version of Jack’s ghost in An American Werewolf in London, and the film seems to shy away from making his presence genuinely unsettling. Similarly, the end of the film – in which the reanimated Gage attacks Louis – feels like it could have been plucked from any number of generic horror films. 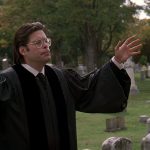 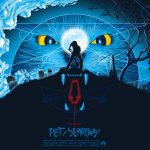 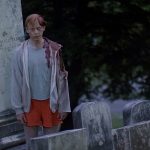 But in spite of its flaws, Pet Sematary is still a strong adaptation, effectively balancing the elegiac quality of the original text with some truly effective scares. King has often said that he felt the book was too nihilistic to publish, but the bleak ending of the story works exceptionally well on film, adding gravity to its questions of how we effectively process grief.